How mesmerizing it is to wake up to the soothing beats of Borgeet, written by the great preacher and propounder of Vaishnavism in Assam, Mahapurush Srimanta Shankardev. Established by Sri Sri Madhavdev, the great disciple of Srimanta Sankardev in 1461 A.D., the Dhekiakhowa Bornamghor is a beautiful and vibrant center of Vaishnavism and the culture of Assam. 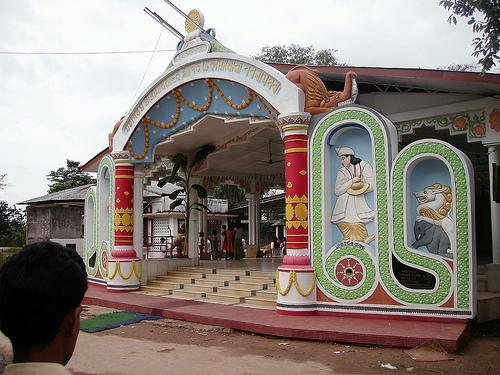 The Dhekiakhowa Bornamghor is located towards the east of Jorhat town and is about 3.5 kms away from NH 37. The Namghar also has an auditorium inside the premise and the whole premise of the namghor expands across a total of around13 bighas of land.  The name originated from the two words namely, ‘Dhekia’(the fern) and ‘Khowa’ which means ‘to eat’ in Assamese.

The legend states that once Sri Madhavdeva was travelling along the river side which flows beside the place where the Namghor has been established.  He visited the small hut of a poor old couple in the village, seeing the Mahapurusha himself visiting their small hut; their joy seemed no bounds as to serve him the best. But, at the same time were worried about the fact that they didn’t have any food to serve him. The rice which they collected that day by begging was hardly enough for the two of them. Hence, the couple finally decide that they will cook and serve the rice to Madhavdeva and will remain hungry themselves.  Somehow managing one meal for their guest, they were now planning for the next one and this time the old woman cut her hair off and sold them in the nearby market and with the money, she brought home salt, some amount of food grains, oil, etc and also her husband to pluck some fresh Dhekia (fern) from the bank of the river. Madhavdeva himself cooked the meal and relished having the rice and the dhekia curry and since the village got his name as Dhekiakhowa.

He then assembled all the villagers at the old couple’s hut and poured oil on a peel of an Elephant Apple (Outenga) and lit a lamp, he also requested the villagers never to put out the lamp and this lamp can be still seen burning in the Bornamghor.

Few years later after the old couple passed away, the villagers constructed the Namghar on the exact spot where the hut stood. They initially named it as the Burha Namghor, in memory of the old couple, but in due course the Burha Namghor got converted to Dhekiakhowa Bornamghor. Hundreds of year old Dhekia flowers could still be seen being well preserved in the Bornamghor.

The Bornamghor has the holy throne called the ‘Monikut’ within the main prayer hall where the sacred scripture is placed on a thapona and is worshipped by millions of devotees every year. There are sacred verses and hyms called ‘Naam’ sung together by the devotees in the prayer hall. It also preserves a collection of sacred texts handwritten by the gurus and various preachers. There are handcrafted idols and a large collection of masks and wooden weapons made by the local artisans for the Bhaona performances. The accessories and the dress of Satriya dance are well kept in display for the public. A large number of idols of various Hindu deities are there within the Namghar and the interiors of the Bornamghor are colorfully and vibrantly painted.

By Train: Jorhat town is well connected to all the major towns and cities in India through railways. The Jansatabdi Express runs daily from Guwahati to Jorhat every morning. Major trains like the Rajdhani Express stops at Mariani railway station in Jorhat.

By Road: The Dhekiakhowa Namghor is well connected through roadways with every parts of Assam. Going towards Sivsagar and after crossing the Ladoigarh police station, one could see the main entrance gate of the Bornamghor and the namghor is situated around 3.5 km away from the main gate.

By Airport: Jorhat has its owned airport named as the Rowriah airport which is 10 km far from the Jorhat city. There are flights from Rowriah to almost all the major cities in India.