Jorhat was declared the last capital during the 18th century of the prestigious Ahom kingdom which ruled over Assam. In the year 1794 the Ahom king, Gaurinath Singha made Jorhat the capital of Assam by replacing Sibsagar which was the former capital. The Ahoms created many tanks in and around Jorhat during that time like Rajmao Pukhuri, Bolia Gohain Pukhuri, Kotoki Pukhuri among others. 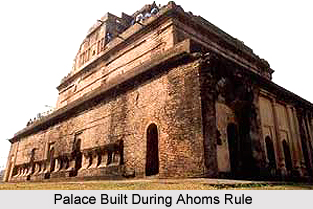 During the Ahom rule, the town of Jorhat developed as a flourishing and rich commercial center. However, during the year 1817, when Jorhat fell under Burmese invasion, the town was completely destroyed and lost its commercial richness. In the year 1819, the Burmese defeated the Ahoms. In the year 1825, the Burmese were subsequently defeated by British and they took Jorhat under their control. It was during that time that revolutionaries like Piyali Phukan, Gomdhar Konwar and Jeuram Medhi emerged and joined the rest of the country of India in the independence fight against the Britishers. The Britishers established Police Thana in Jorhat in the year 1839 and during the Sepoy mutiny in the year 1858, the revolutionaries Piyali Phukan and Maniram Dewan were hanged publicly.

In the year 1838 Moniram Baruah who was the first chronicler of Jorhat, wrote the book ‘Buranji Vivek Ratna’. A trading center named ‘Borgola’ was founded in Jorhat by Sagarmal Baid. In the year 1850, a devastating flood occurred which swept away the Bhogdoi Bridge and its course was subsequently changed. The Jorhat Christian School was also established in the year 1856. In the year 1858, the Jorhat tea company was set up and in the year 1885, a narrow gauge train service was built and Jorhat Provincial Railway came into operation. This gauge railway facilitated the growth of the tea industry of Jorhat. In the year 1869, Jorhat was declared as the sub division of the Rangpur district.

In the year 1871 a monthly magazine named ‘Assam Bilashini’ was published from Majuli River Island. The Jorhat Gymkhana club, a prestigious club of the town of Jorhat was also set up in 1876.