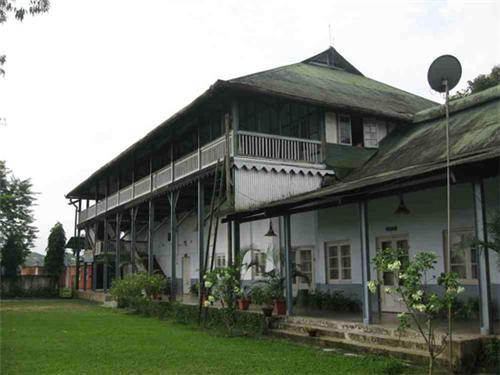 One of the oldest golf courses in the world, the Jorhat Gymkhana Club was built by the British in 1876. Then secretary of the club D Slimmon built the club in Seconidhara village. At the very beginning the club was established as a ‘planter’s club’ for the tea planters of Assam. The original club was an old fashioned little woodhouse, situated at the middle of the racecourse serving as camping and parade ground. The club was later shifted to another location and the present club was established in 1885.

Jorhat being one of the largest cities of Assam, among other attractions of the city the Jorhat Gymkhana club also serves as one of the major tourist attractions of Assam. Being one of the oldest golf courses in the world, the club is vying for a position in the World Heritage list. If you are a horse race enthusiast then visit the Gymkhana club in Jorhat. Horse races in the Jorhat Gymkhana Club would amuse you. The Governor’s Cup is the major trophy awarded here.

Golf players would like the golf course here. Built during the time of the British the club has all the requirements of a golf course. The club has a lush green 9 hole golf course. It has a very mature tree line, many small ponds and water bodies that can test the patience of every golfer.

The club also has a unique tradition of pony racing commonly known as the historic Jorhat Race. The race attracts many tourists and sports lovers for the Jorhat race.

Jorhat is known as the “Tea Capital of the World” for the production of tea so tea holds a very special importance here. The Jorhat Gymkhana Club hoists the tea tourism festival here.

The other attractions of the club are lawn tennis grass courts, swimming pool, billiards, polo, gentlemen’s bar and cinema theatre. The cricket ground here is called Jorhat Gymkhana Ground. The ground had the distinction of hoisting the CK Naidu Under-19 Indian Cricket tournament matches. The ground is used by Khelmati sports club for practicing cricket.

How to reach Jorhat Gymkhana Club

Jorhat has a well connected air, rail and road network. If you are travelling by air to Jorhat then you can avail the facilities of the Jorhat airport located within the city. There are direct flights to Guwahati from Jorhat. If you are traveling to Jorhat by train then  deboard at Jorhat town railway station or Mariani railway junction, the two stations of the Jorhat city. For traveling by road you can book bus tickets for Jorhat from Guwhati as buses are available everyday from Guwahati to Jorhat. Reaching Jorhat you can hire taxis, cars or auto rickshaws to reach the Jorhat Gymkhana Club.