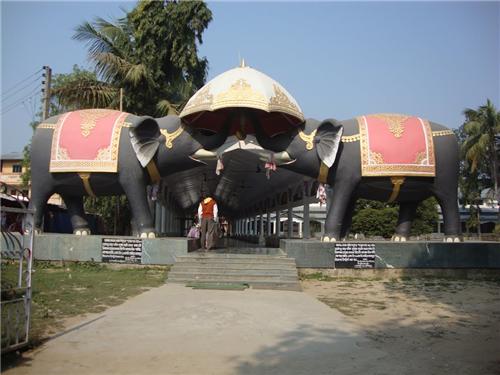 Jorhat is the second largest city in Assam and is known as the cultural city of the state of Assam because of its high interest towards arts and culture. Jorhat is situated 314 km from Guwahati; the name has been derived from two words, viz. ‘Jor’ meaning joint and ‘haat’ meaning a market. Hence the combination of two words means ‘two markets’ and these two markets are Macharhaat and Chowkihaat situated along the banks of the river Bhogdoi since the 18th century.

Jorhat is known for its tourism and is blessed with various tourist places with historical importance. The city is culturally very rich and has a significant history of the Ahom rulers. There are many beautiful tombs built during Ahom rule and also many burial places of ancient Ahom kings that can be seen by the tourist in and around Jorhat. It is a good mixture of both modern and ancient culture and the people in Jorhat strives to maintain its old traditions, belief and culture.

The roads in Jorhat are well developed and are nestled in the midst of tea gardens sprawling in and around the city. Going on a long drive can be pleasant experience. The Tocklai Research Association (TRA) situated in Jorhat is the largest and the oldest tea research station of its kind in the entire world.

Jorhat is home to many famous monasteries and temples like Dekiakowa Bornamghar, Hatigar, Borbetai Than, Garakiadhol Temple, Dakinpat Satra and Garmur Satra. The Gibbon Wildlife Sanctuary is one of the major tourist attractions in Jorhat and is the only sanctuary in India named after gibbon as it contains the densest population of gibbons. Chandan Nagar is a suburb of the city that is known for its culturally active population. There is a modern golf course that can be seen in the town at the Gymhkana Club as well.

Majuli is situated 20 kilometers away from the heartland of the city of Jorhat. It is the largest river island in the world.  Majuli has about twenty six satras or the cultural house of power of which the Auniati, Kamalabari and Garmur are worth mentioning. These Satras propagates the religious ideologies of the great Assamese medieval Vaisnavite saint Sankardav and Madhavdav.

Jorhat being the last Capital of the Ahom Kingdom has many archeological values associated to Rajamaidam - the Ahom king’s the last burial mounds.  Jorhat today has grown into a thriving town with a strong sense of identity and character. It is the largest amongst all the cities and towns in Upper Assam with broad and beautiful roads, cutting each other at right angles.
Facts
State: Assam
District: Jorhat
Famous for/as: Wildlife
Languages: Assamese, Bengali, Hindi
Best Season: Oct - Mar
Weather: Summer 15 to 28°C, Winter 7 to 18°C
Altitude: 116 m
Pincode: 785001
STD code: 0376

Jorhat is known for its various places of historical significance. Some of the important places in Jorhat include –

Bangalpukhuri: It is situated on the southern part of Jorhat, near Na-ali, it’s actually a tank which is popularly known as Bangalpukhuri.

Burigosain devalay
The priest and the Buri - gosain were brought here from Jayantiya hills after defeating their king.

Magolu Khat
Magolu Khat is situated at about four miles west of the Jorhat town. The Ahom King, king Rajeshwar Sinha built the Magolus here after marrying the princess of Manipur.

Borbheta
Borbheta is situated 5 km. from Jorhat town and the place is known for the District Jail, Assam Agriculture University, the Christian Mission Hospital and Jorhat police Reserve all situated there.

Karanga
Karanga is a village in Jorhat and is famous for its Black smithy.

Nimati
Nimati or popularly known as the Nimati Ghat is an important river port of not only Jorhat by of the whole of Upper Assam. The port is situated at a distance of 17 kms from Jorhat.

Jorhat in recent time has seen a rapid development with the growth of various malls and marts in and around the Jorhat town. It has gradually become the main shopping hub of the whole of Upper Assam. From handlooms to brands, a tourist can get the taste of everything. Mention may be made of places like Marwari Patty, Nirmal Chariali, Rupahiali, Gar Ali, New Balibat Road, etc. which are famous for shopping in Jorhat. One can also pick up the famous Assam tea for its magnificent aroma from the markets of Jorhat.


Hotels and Restaurants in Jorhat

Jorhat has a good transport network. There are two trains running daily from Guwahati to Jorhat and the nearest major station in Jorhat is the Mariani Junction that is located around 17 km from Jorhattown. The frequency of trains passing through this place is higher. Jorhat is also well connected from Guwahati by Bus. It takes around 6 hours to reach Jorhat from Guwahati. The airport in Jorhat is known as the Rowraih Airport. The place is connected to some of the main cities in India such as Kolkata, Guwahati and Bangalore. It is also well connected to places such as Dibrugarh and Shillong.

To travel around the Jorhat town, one may find rented taxi services that available from most of the hotels and lodges in Jorhat.